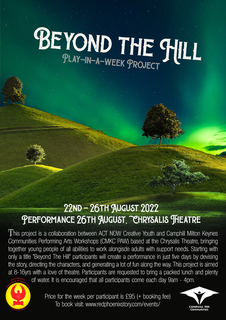 Beyond the Hill
Play-in-a-week Project 2022
22nd - 26th August
Chrysalis Theatre, Camphill MK, near Willen Park
For Ages 8-16 yrs
This year's play-in-a-week project will take place in conjunction with the residents of Camphill MK. This project focuses on creating a theatre company across age and ability to build understanding and cooperation. Working with adults with support needs the participants will create a piece of performance to be performed on the 26th August.
Bookings will open in May 2022 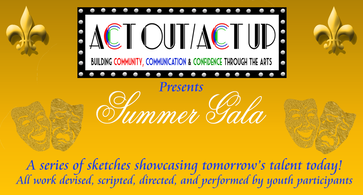 Summer Gala
14th July
5 pm, York House Gardens (or the Hall if bad weather)
Bring a picnic to enjoy some open air theatre as ACT OUT and ACT UP present a series of playlets devised, written, directed and produced by the participants themselves. This is a real opportunity to show their own work and be as creative as possible.

We also filmed two stories in Great Linford Manor Park to celebrate the park during its renovations in 2020 and 2021.
SUMMER GALA
Due to lockdown we present our summer gala to a limited audience and filmed the presentations which were shared digitally with parents. It took place on the 15th July at 5pm in the York House Gardens 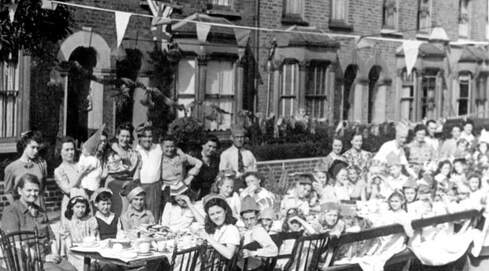 VE DAY CELEBRATIONS
We finally did it!

As part of the national VE day celebrations marking 75 since the end of WWII, ACT OUT & UP, in collaboration with LIVING ARCHIVE received National Lottery Heritage Fund to produce a devised interactive performance using archive material from the Living Archive. We had just begun this project when the Covid-19 Pandemic struck. Whilst we could move the drama sessions online it did delay the project which evolved into a film project rather than a theatre piece and was resumed in the autumn term 2020 and then waylayed again due to the second lockdown. Throughout our participants used our VE Day information page to help develop their characters and add ideas to the filming and music and we finally film it in June 2021 and its word premiere will be on 2nd September 2021 at 5pm in York House Centre.

Unfortunately 2020 saw the cancellation of our annual Summer Gala on the 2nd July, 4.30pm where our troupe of actors and directors would normally present their own work exploring devising, site-specific & promenade theatre. We also had to cancel our annual Pantomime, which would have taken place on the 5th (5.30pm) & 6th (2pm) December. However, it takes more than a pandemic to stop ACT OUT & ACT UP, for a year we went online and even produced a virtual panto. 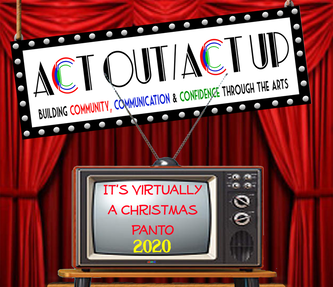 ITS VIRTUALLY A CHRISTMAS PANTO
Our physical panto may have been cancelled but there is no stopping our ACT OUT & UP actors. The Grimms Brothers may be self-isolating, Ma maybe planning a cheesey Christmas and the Dr is "solar distancing" but that's nothing a little zoom call can't fix... This year the panto was shared for a limited time via the website rather than being performed at York House.

The Panto is one of biggest fund raising efforts of the year, this year without it and with funding limited due to the pandemic we really need every penny - so search the back of the sofa and the depths of pockets to help us continue our youth theatre. Thanks to people generosity we raised £600 to help us weather the .lockdowns, thanks you everyone.
During the lockdowns we also took part of the National Theatre's zoom project ImagiNATION producing two plays (Chinny-Chin-Chin and The Great Big Ham) filmed online, and a zoom filmed video-play YB Silent in honour of the out going Youth Bard of 2019/2022. 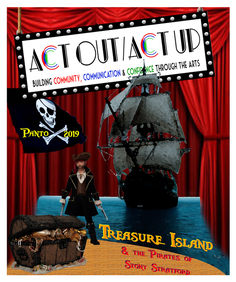 2019 started with a bang as we were awarded a Tesco community grant of £2,000 for our 'Spring into Action' project which focused on physical theatre in our spring term, this included developing skills in clowning, mask, mime, commedia del arte, dance, and stage combat. These skills were then used as part of the participants self devised and scripted plays produced for the Summer Gala  on 11th July.

In December our annual pantomime was 'Treasure Island and The Pirates of Stony Stratford', took place on the 7th (evening) & 8th (matinee) December, and was our best, most colourful and musical panto yet with live music provided by Stephen Ferneyhough and 9th Bard of Stony Stratford  Mitchell Taylor joined the crew to swash and buckle across the high seas. 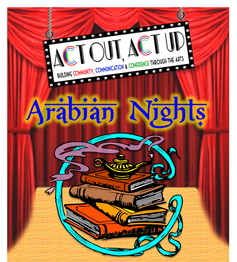 In 2018 we our summer gala took advantage of the good weather to be a 'play & picnic' event with seven short plays produced by hte participants themselves. Our annual pantomime was on the weekend of the 5.30pm on the 8th December & 2.30pm on the 9th December 2018, this time Ma and the Grimm Brothers visit relatives in Ole Baghdad for Christmas in Arabian Nights in an adventure of terrible torrid tyrants, wiley woodcutters, 40 thieves, and a flying carpet. 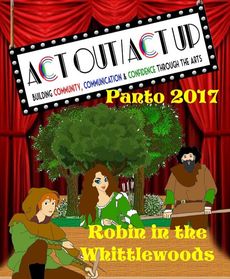 2017 saw ACT OUT & ACT UP work with LIVING ARCHIVE to create a 20 minute film called 'HIstony' about the local history of Stony Stratford in the spring term. The summer term brought the annual summer gala, a chance for the group to write, direct, and devise their own pieces of performance, this year we had 6 original pieces created by the group. The Autumn started with fun and games to skill build and prepare for the Panto on 2oth and 21st December 2017 featuring Stephen Hobbs the 7th Bard of Stony Stratford, and a cameo performance by Andy Powell. Another original creation from H30 especially written for ACT OUT and ACT UP. 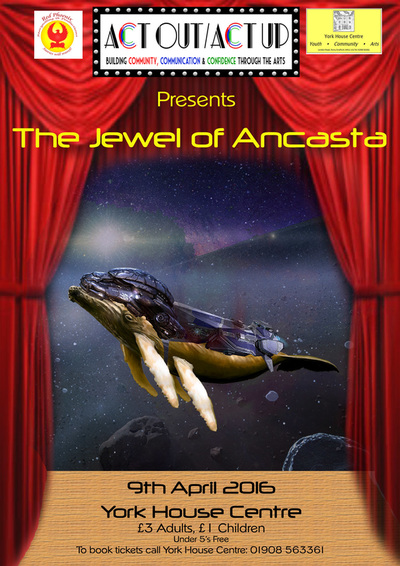 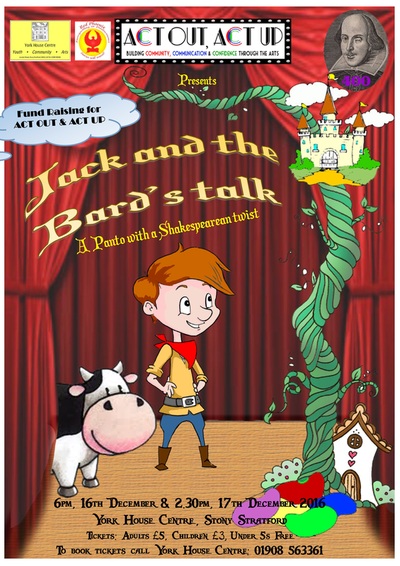 As well as the main shows, the group also performed at the Stony Stratford's Shakespeare evening 24th April 2016, the Big Lunch - part of StonyLive 2016, produced their own plays for their Summer Showcase Gala,Stony Lights Switch-on day, and Angels in the Abbey at Bradwell Abbey. 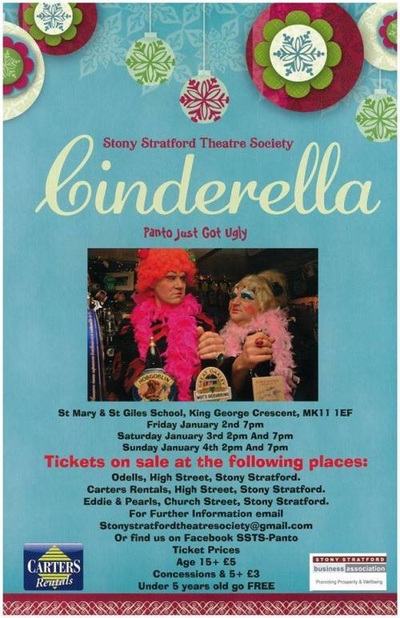 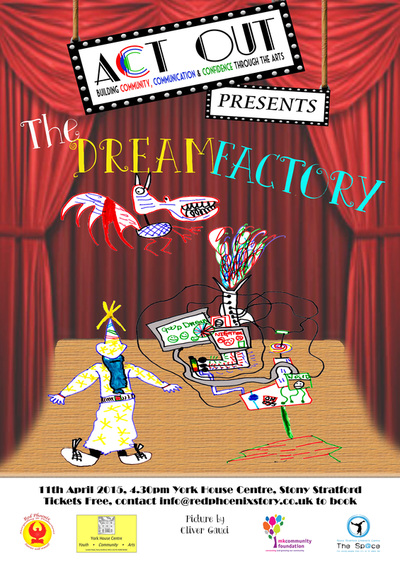 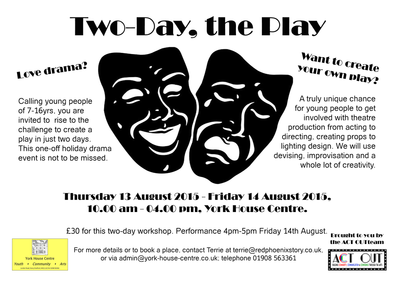 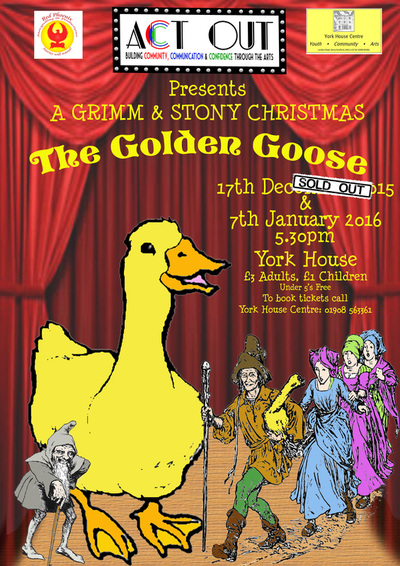 In their first full year ACT OUT took part in the first Stony Stratford Theatre Society pantomime, Cinderella, delved into the realm of dreams and nightmares in the scripted and devised play Dream Factory, created a play in two days focus on the other-side of fairy tales to ask if the villians really are as bad as they seem, and if heroes are really as good. As the Stony Stratford Theatre Society were not doing a second panto at the end of the year, ACT OUT created their own, The Golden Goose, which started a tradition. They also performed at the Big Lunch - part of StonyLive 2015, produced their own plays for their Summer Showcase Gala, Apple Day, Stony Lights Switch-on day, and Angels in the Abbey at Bradwell Abbey.

The idea for a term time youth drama group was created when storyteller theatre practitioner Terrie Howey moved to  Stony Stratford and met Ken Daniels and Fiona Trinder of York House Centre. A very successful taster session was run during the autumn half-term and the group started officially the first week of November 2014, just in time to get involved with Stony Stratford Theatre Society who were planning their first pantomime.